What is a Manatee? West Indian manatees are large, gray aquatic mammals with bodies that taper to a flat, paddle-shaped tail. They have two forelimbs, called flippers, with three to four nails on each flipper. Their head and face are wrinkled with whiskers on the snout.

The manatee’s closest relatives are the elephant and the hyrax (a small, gopher-sized mammal). Manatees are believed to have evolved from a wading, plant-eating animal.

The West Indian manatee is related to the African manatee, the Amazonian manatee, the dugong, and Steller’s sea cow, which was hunted to extinction in 1768. The average adult manatee is about 10 feet long and weighs between 800 and 1,200 pounds.

Ida May is an American Mini Pig, she weighs 100 pounds, she is 3 feet long and 16 inches tall.

She loves to go camping and to the lake and play in the water. 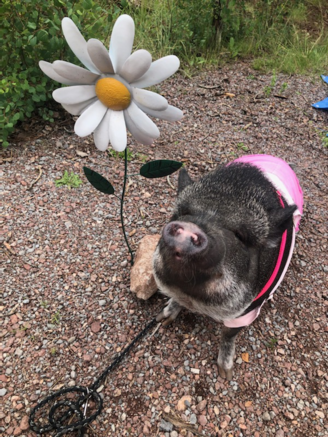 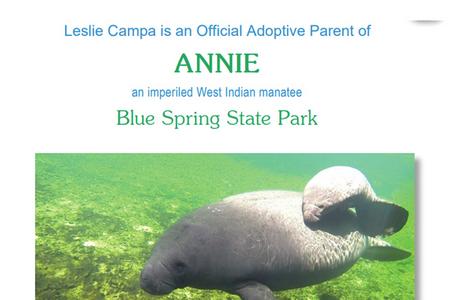 Annie was rescued as an orphan on August 12, 2005 from the Halifax River near Port Orange, Florida. At the time, she was just a little over four feet in length and weighed only 70 pounds. Newborn manatee calves are generally about four feet long and weigh about 65 pounds, so Annie was too young to be on her own. She was taken to SeaWorld Orlando to grow and gain weight, and it was there that she met her friend Rocket. Rocket was also an orphaned calf who had been rescued in 2006 at Blue Spring State Park. Annie and Rocket were together in rehabilitation at SeaWorld, and they were released at the same time at Blue Spring on February 11, 2008. On the day she was released, Annie was much bigger than when she was rescued. She was about eight and a half feet in length and weighed 1,055 pounds. Both Annie and Rocket were “tagged” so they could be monitored for successful adjustment to the wild. The tag consists of a belt that fits around the base of the manatee’s tail, and a tether attaches a floating transmitter to the belt. The tag is designed with a “weak link” so it will break loose if it becomes entangled in vegetation or debris. Annie is not shy, and she is known for hanging around the people-populated areas of the park. Annie and Rocket did well after they were released, but two days before they were due for a heath check, someone cut their tags off. The tags were recovered from a boat in nearby Lake Beresford, but the “kids” or the “twins,” as park staff called them, stopped coming in for visits to Blue Spring. Two and a half weeks went by, and there was still no sign of Annie or Rocket. Then they turned up in the swimming area at the park, and manatee researchers tried to fit them with tags again. Annie was successfully tagged, but Rocket was a tease, presenting his tail and swimming off. The adjustment of Annie and Rocket to the wild was a success and both tags have since been removed. Still, the two manatees stayed together, although they were almost four years old and should have been going their separate ways. As Wayne Hartley, the Club’s Manatee Specialist, put it: “Annie loves people, and Rocket loves Annie.” The year she became a Club adoptee, in 2012, Annie turned seven, and she was very pregnant when she visited the park. Female manatees usually have their first calf at age five or six, so Annie was a bit late, but not by much. Her calf Arron was born in Blue Spring at the end of June 2012. For two or three weeks, Annie and Arron hung around the park. Volunteers, many from Save the Manatee Club, had to be organized to keep people from disturbing them. When Annie and Arron came back for the winter they were the center of a small pack of juvenile manatees that wanted to nurse. Fast forward to 2015 and Annie came in towards the end of July very pregnant and had a female calf. Again when she came in for the winter a group of juvenile manatees gathered around her to nurse. The calf was observed to be losing weight to the point a capture was organized in early February and it was found that Annie too was underweight to a dangerous point. They were taken to Zoo Tampa at Lowry Park and returned in the latter half of March looking fat and healthy. Annie gave birth to another calf in the summer of 2016 and the summer of 2018. 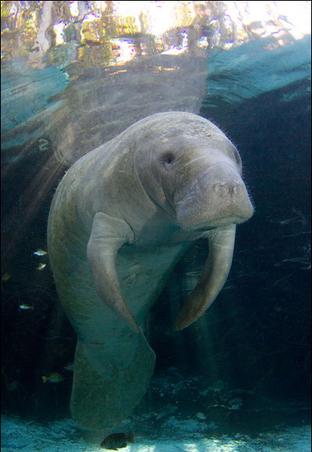 Thank you for your Magical Message, which will arrive all the way to the Flutter Forest shortly. Leslie the Butterfly Fairy will get back to you within 2-3 days, or less. It depends if she is fluttering about spreading joy. Thank you ever so much and remember, "You are as special as can be!"